As you all know, Arduino was introduced in 2003 as the sensational open-sourced hardware platform

that transcended the DIY market.

WIZnet's hardwired TCP/IP chip, W5100, was chosen by Arduino for their official Ethernet Shield in 2008.

Since then, WIZnet Ethernet controllers were used for the next generations of Arduino Ethernet Shields.

Arduino enabled makers to expand their imaginations and share DIY IoT projects – and proven by the users,

WIZnet became the 'de facto standard' for Ethernet in the Arduino world.

After a successful collaboration with Arduino,

WIZnet continued to be involved in OSHW by becoming an ARM Mbed silicon partner in 2015.

Since then, Raspberry Pi has sold over 30 million boards.

Raspberry Pi released RP2040 and Pico in 2021; a powerful and price competitive solution that can grant

Upton Talks Raspberry Pi SoC: Why We Named it RP2040

Based on experience working with Arduino, WIZnet can provide SPI interface for easy expansion of hardware

for the Raspberry Pi Pico community as well.

WIZnet’s ioLibrary is open-sourced and we’re preparing the new products to work in C/C++, CircuitPython, 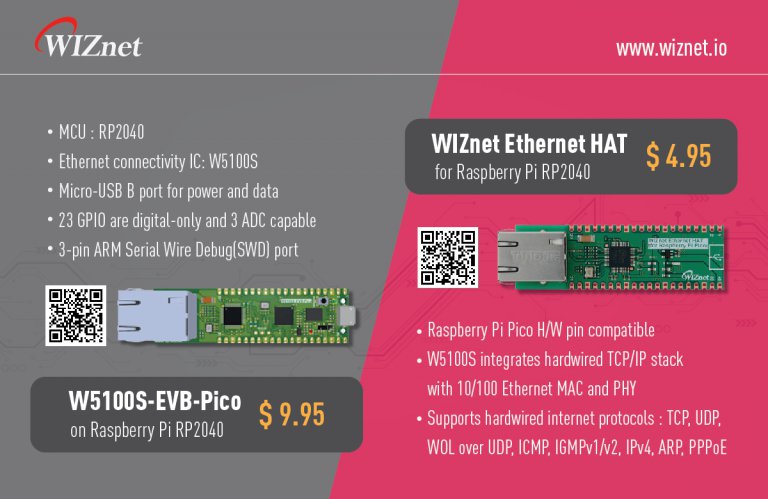