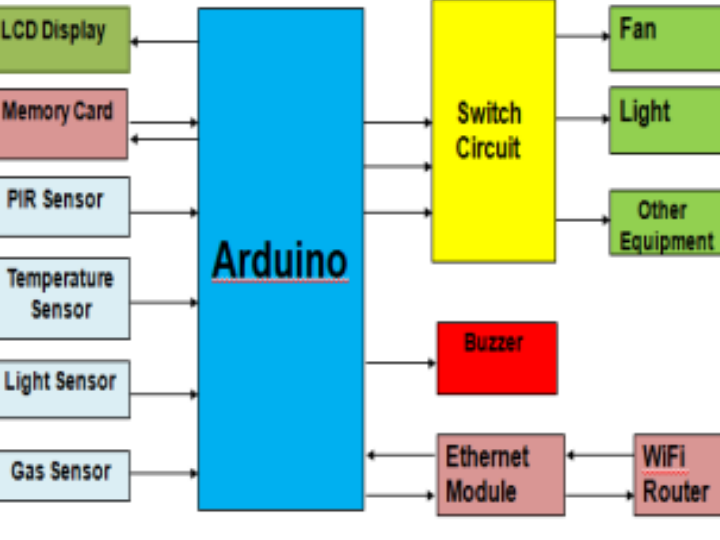 Easy to connect: Wi-Fi ranges have covered all home area so it is easy to connect Wi-Fi based mobile. Size: This system is easy to install existing electrical board so more space is not needed. Circuit development: Home automation circuit is simple to design. It contains microcontroller with actuator circuit and sensor interfacing. .

System architecture describes the block diagram of home automation using Wi-Fi (Fig.1). It consist of Arduino, Ethernet Module, switch circuit, memory card, Buzzer and Sensors. All the devices of this system are connected to the Arduino controller. Sensors are input devises that gives different environmental input parameters. LCD is the output device to show the value of sensor and massages. Switch circuit operates the electrical and electronic appliances. Buzzer is used to give loud sound when there is any problem in the system. Ethernet module is used as a communication device between controller and users. Wi-Fi router is connecting to the Ethernet module to share web file from memory cards. Fig. 1. Block diagram of Home automation system

Switch circuit is combination of relay switches. Relay is the electromechanical switch which is operated by electrical supply. Relay is used to control high voltage devices using the low control isolated voltage. It is a 5 pin device having 2 pin for Input and 3 pin for output (Normal Open, common, and Normal closed).Input pin is internally connected with magnetic coil that energies when we apply 5V. When coil energies it switches output from normal open to normal closed mode. Switch circuit has LED indicator to show which relay is ON and OFF.

In this system we used LM35 temperature sensor. It operates on 4V to 30V and its working range is -55 °C to 150 °C. It has low output impedance which calibrates directly in Celsius.

In this system we are using LDR as a light sensor. LDR is a Photo resistor that is light controlled variable resistance. It contains two photo conducting cells. The cell resistance increases when the light intensity is increased. It is also used as smoke detector.

This is used for human body detection. It operates on 5V DC supply. Passive infrared sensor has detection range of 6 meter and it is a dual element sensor with low noise and high sensitivity sensor

In home automation system we used MQ 2 sensor as a Gas sensor. MQ 2 sensor is made from SnO2 sensitive material, which has low conductivity in clean air. The sensors conductivity is higher along with the rising gas concentration. This sensor has high sensitivity to LPG, Propane, and Hydrogen.

Proposed home automation system is based on three modules; the hardware interfacing, Software programming and user interface and Security System '

A. Hardware Interfacing In this system, Input devices are sensors that interface with the Arduino controller. Arduino controller gathers the environmental physical parameters such as temperature, Light intensity, Human interface, and gas sensor from sensor. Using this value controller gave instructions to the switch circuit to operate home appliances. Buzzer and LCD is output device that interface with microcontroller. ATmega 2560 uses Serial Peripheral interface (SPI) to communicate with Ethernet module. This Ethernet module uses SPI to communicate with memory card. Users communicate to the control signal through Wi-Fi router which is connected to Ethernet Module via Ethernet cable. Interfacing of hardware components using Ethernet is reducing the complexity of the circuit. Fig. 2. Hardware interfacing circuit

B. Intranet Base Graphical User Interface The home automation system used in this project is designed to use the intranet base user screen. Embedded hardware interface application is implemented in the Arduino compiler. If the users are aware of knowledge about standard browser such as internet explorer, chrome etc. they can easily control this system via browser. This screen is implemented in server by using HTTML and java scrip. Users can easily access the graphic user interface control screen through intranet link (https:// 192.168.1.20). Users should have knowledge of mobile and windows operating system. Fig. 2. Ghraphical User Interface

C. Security System The home automation system contains PIR sensor, GAS sensor and temperature sensor for security purpose. PIR sensor is placed on windows to monitor any human entry and if it is observed, this sensor give signals to controller and buzzer will start. If there is gas leakage then gas sensor will detect this and send signal to controller to start buzzer. Temperature sensor will sense rise in temperature caused by any accidental burns in the home.

D. Software Interface This home automation system make using of Arduino base compiler. Software programming is made in embedded C. The aurdino compiler is freeware software and it has many tasted libraries. This system consists of standard library for LCD, Ethernet shield and web programming. The standard library is easy to call the instruction in any position. Web base HTTML and java scrip programming are in memory card. Controller is made up of programming that calls web files from memory card to Ethernet shield and shows them in mobile application through intranet link Fig.4. shows flow chart of programming. When the door of home is opened the program will directly go to auto mode and start the home appliances with reference to the sensor value. If we select the manual mode then all the appliances will be controlled manually through the mobile or laptop that access controller through Wi-Fi connectivity. International Engineering Research Journal Page No 2043-2046 Fig. 4. Flow diagram for Arduino Programming

This paper show the implementation of home automation using Wi-Fi and Security system the microcontroller controls the Fan, Light and other appliances through Relay circuit. User can operate and check status of home appliances from web base user friendly graphic interface. In Auto mode when home temperature rises above 25°C fan start and stop below 25°C. Light start when light intensity above 50% and gets off below 50% intensity. Other appliances like TV and AC starts in auto mode automatically when operated from its remote. In Manual Mode we have operated all appliances manually on intranet bas e graphic interface. For security purpose, Gas intensity more than 3000 ppm then buzzer activated and it stop below 3000ppm. If Temperature is more than 100°C then buzzer will activated. Placed one PIR on window, If anyone trying to enter from window then PIR detect the motion and buzzer will activated for 60 sec.

Recently, Home automation is the most important and promising fields now days in developed homes. In this project, we successfully developed home automation using Wi-Fi Router and security system. Project is easily implemented in existing electric board. The project reduces the cost of extra server such as computer or Raspberry Pi type microprocessor. Project is comfortable for user to access auto and manual mode of control. Project tasted on to the four appliances in between two appliances (fan and light) are controlled through sensor in Auto mode. Security system verified to use Gas and unwanted human interference.

I would like to thanks Prof S.A. Kulkarni and Prof. M.N. Kakatkar of Sinhgad College of Engineering Pune, for their guidance in technical documentation and invaluable support.