Hi,
I would like to make a WizFi360 LED controller PCB that can be controlled using a mobile application or using sensors & edge AI. 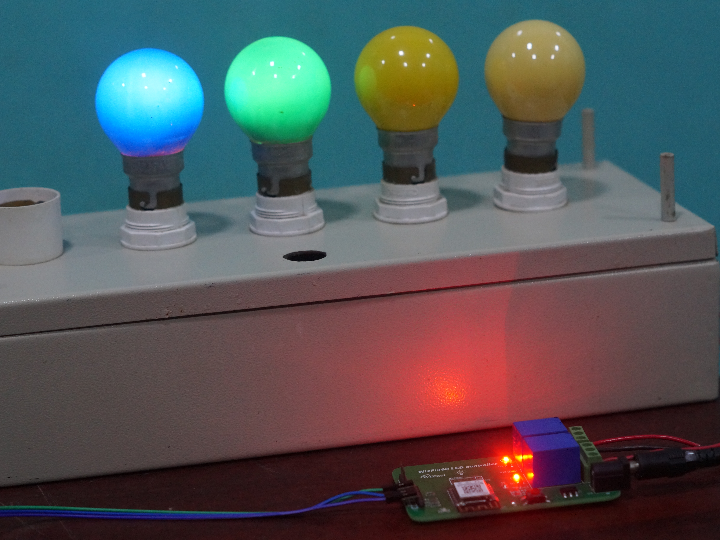 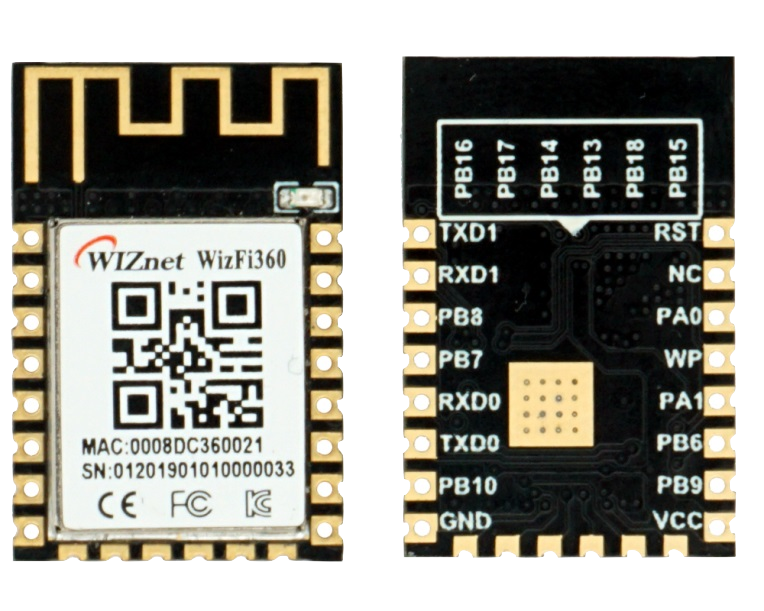 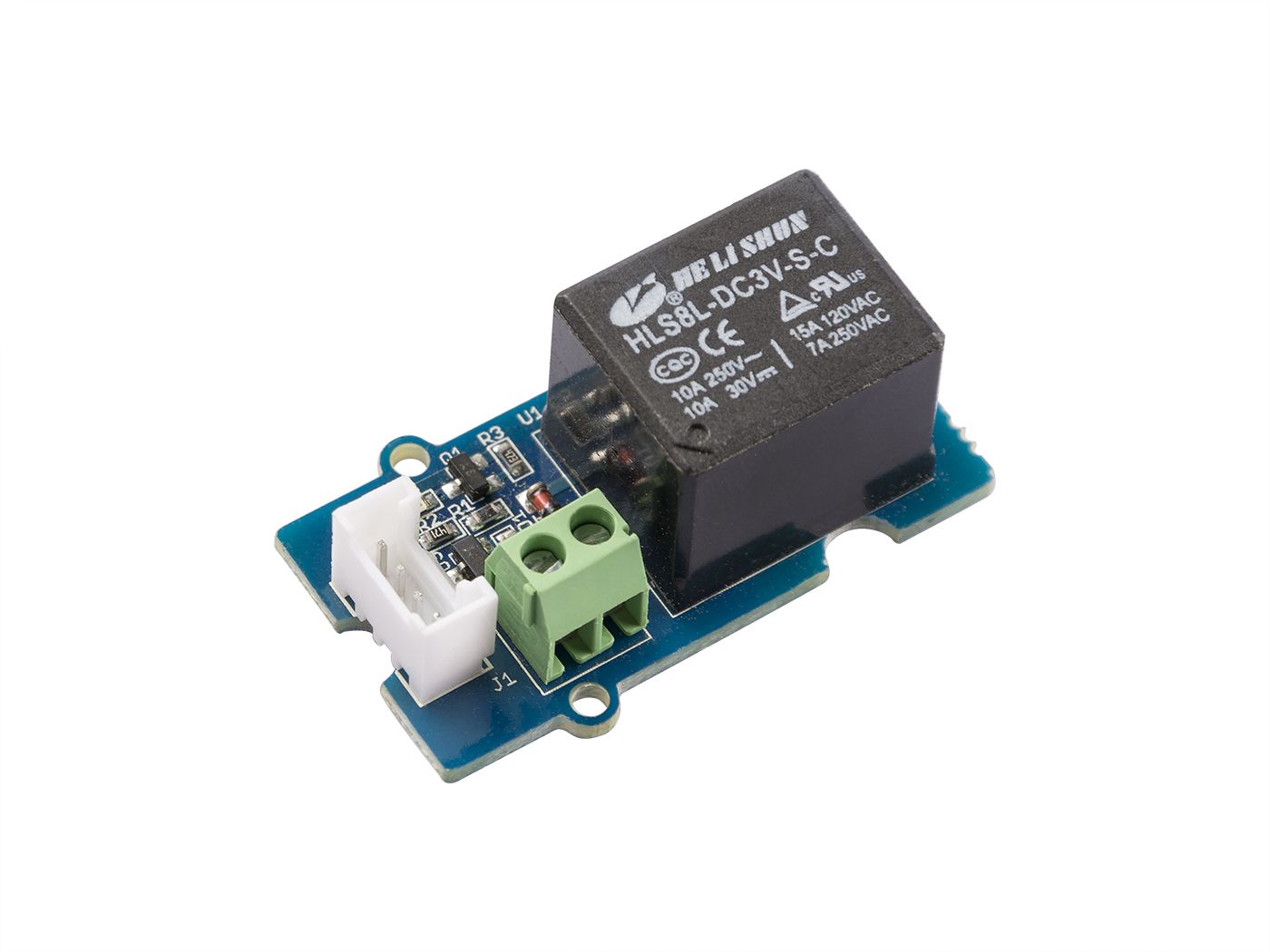 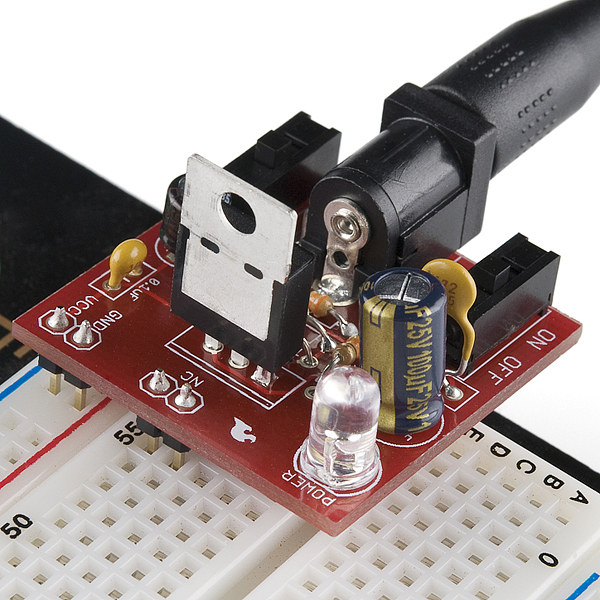 We will be making a LED controller using WizFi. We will be designing the PCB using easyeda. The generated Gerber files are fabricated them. Firmware for WizFi360 is also written. 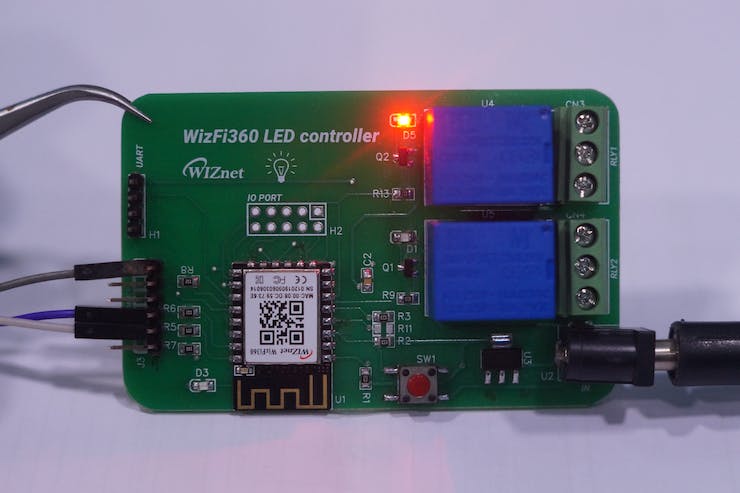 We received a WizFi360-PA module from Wiznet. WizFi360 is a low-cost Wi-Fi solution that not only is Azure Certified and supports AWS SDK examples, but also is the official Wi-Fi Shield for Arm Open-CMSIS-pack and Keil Studio Cloud; lastly, comes in a Raspberry Pi Pico compatible board form-factor 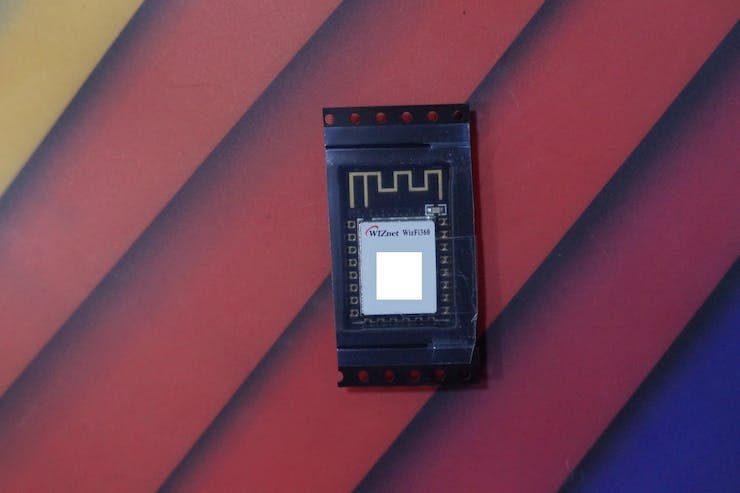 The Pin Definition is given below 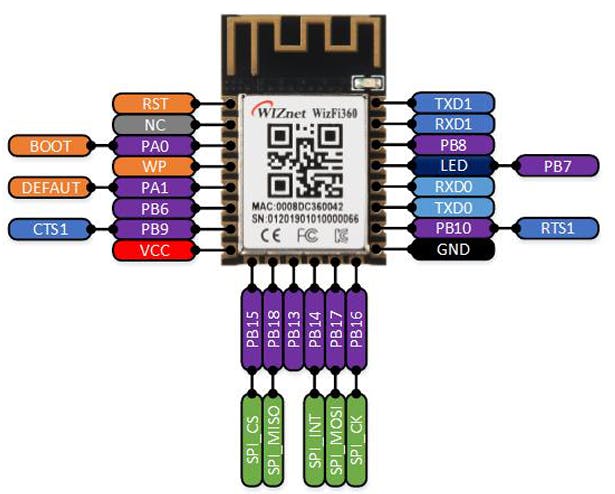 The WizFi360 is powered by the WizFi360-PA module. The relays are connected to the pins PB6 and PB8. 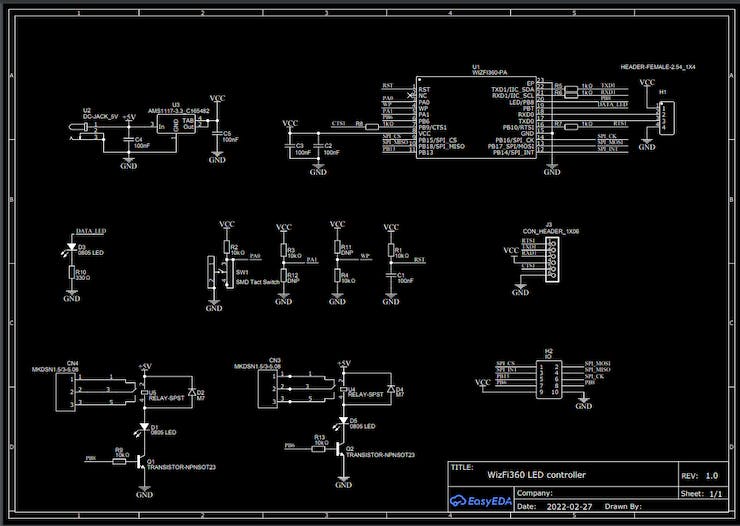 Sch
How does the electronic circuit work?

The electronic circuit is formed by a group of relay circuits that will be turned on/off using a mobile phone or using AT commands. This will be done by controlling the PB6 and PB8 pins.

What logic was implemented?

The WizFi360 module makes use of AT commands to control the relay ports. The AT commands are sent to the module from a PC using a USB-to-Serial converter. 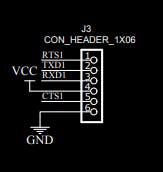 The relay is turned on and off by pulling the relay pin's HIGH or LOW.

relay port
We have a DC connector for powering the electronic project with a +5V adapter. The other 2 connectors will be used to connect the output loads to the relays.

Finally, we finalized the electronic schematic design and developed the layout of the printed circuit board. See the result in the figure below.

Two mounting holes were inserted in the electronic board to facilitate the fixing of the board to the desired place.

The following is the full 3D view of the board. 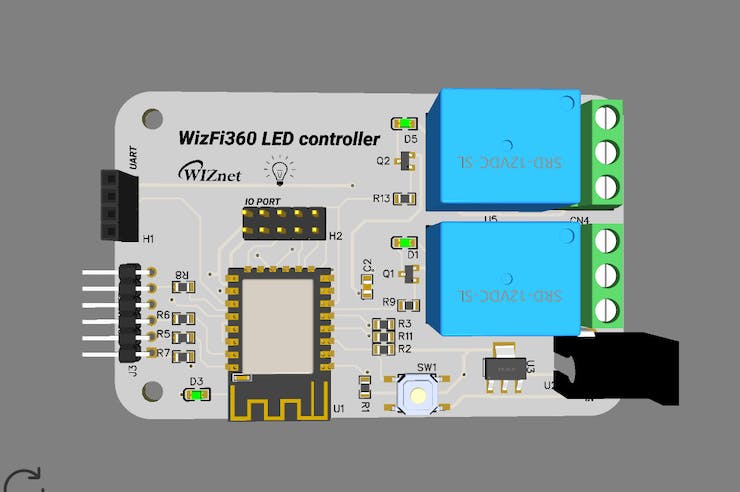 3D model
The boards were fabricated by an Indian company SAKTHICADD, which helped me fabricate high-quality PCBs within a few working days.
1 / 2 • PCB
The components were purchased and assembled as shown below.
Testing
We will be testing this board with AT commands directly from the PC and configuring the WizFi360 to Wi-Fi and controlling it using mobile.
Output connections
Connect the LEDs to the relay port as shown below. We will be connecting a 230V bulb to the relay to check the operation. 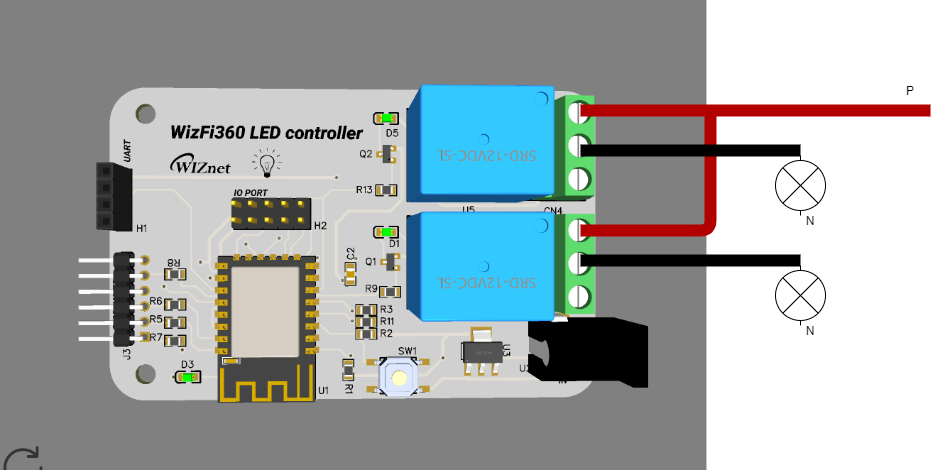 We have made a 230V bulb setup with a holder as shown. Connect the phase to the relays and bulb to the relay's common.
Using AT commands
Connect the USB-Serial converter to the Programmer port on the board.
Open a Serial monitor and select the baud to 115200. I'll be using putty to send the AT commands.
From the documentation, we use the following AT commands to turn ON/OFF a light (relay) from the PC. 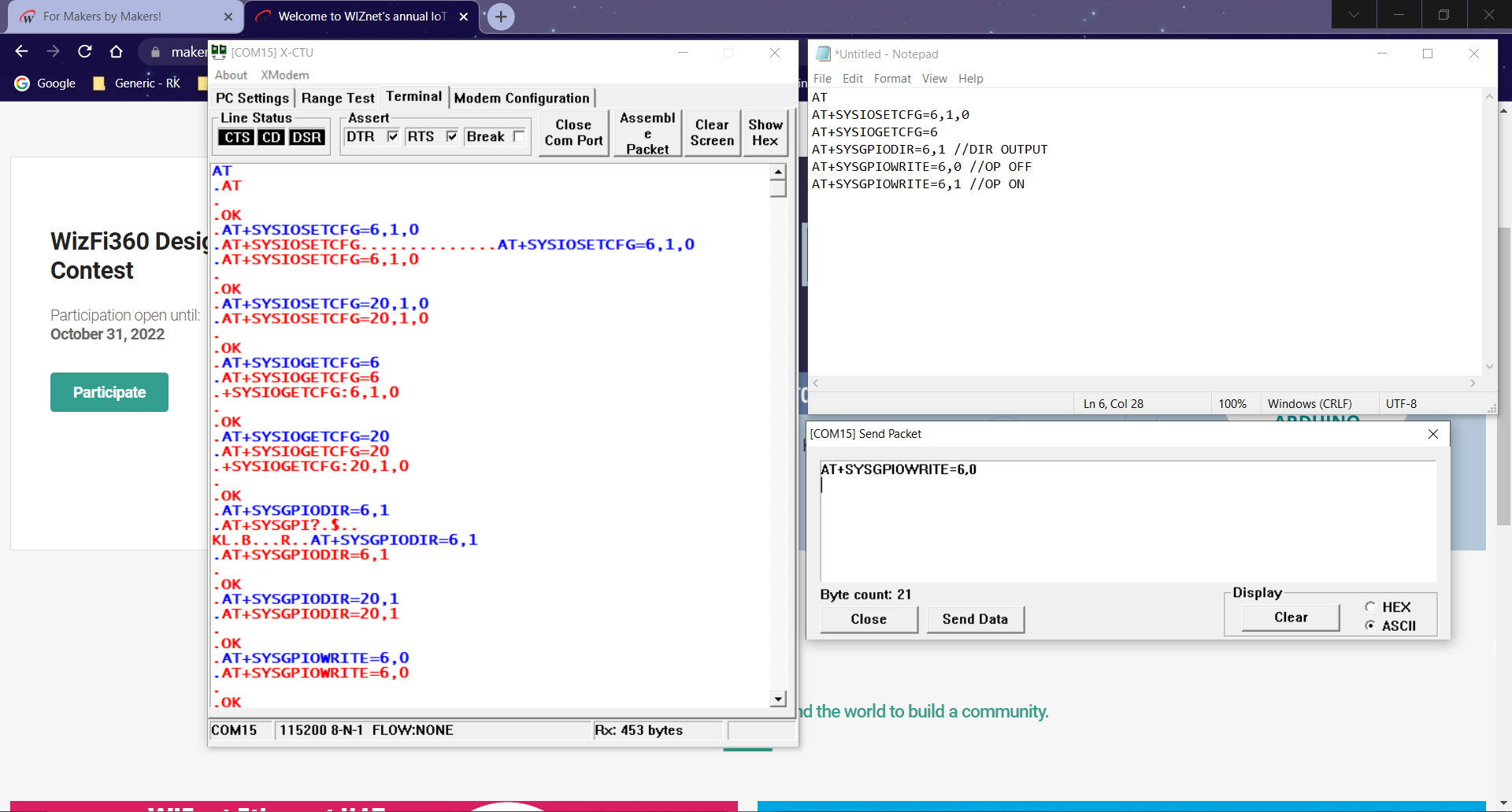 You can see the relay switching in the image below. 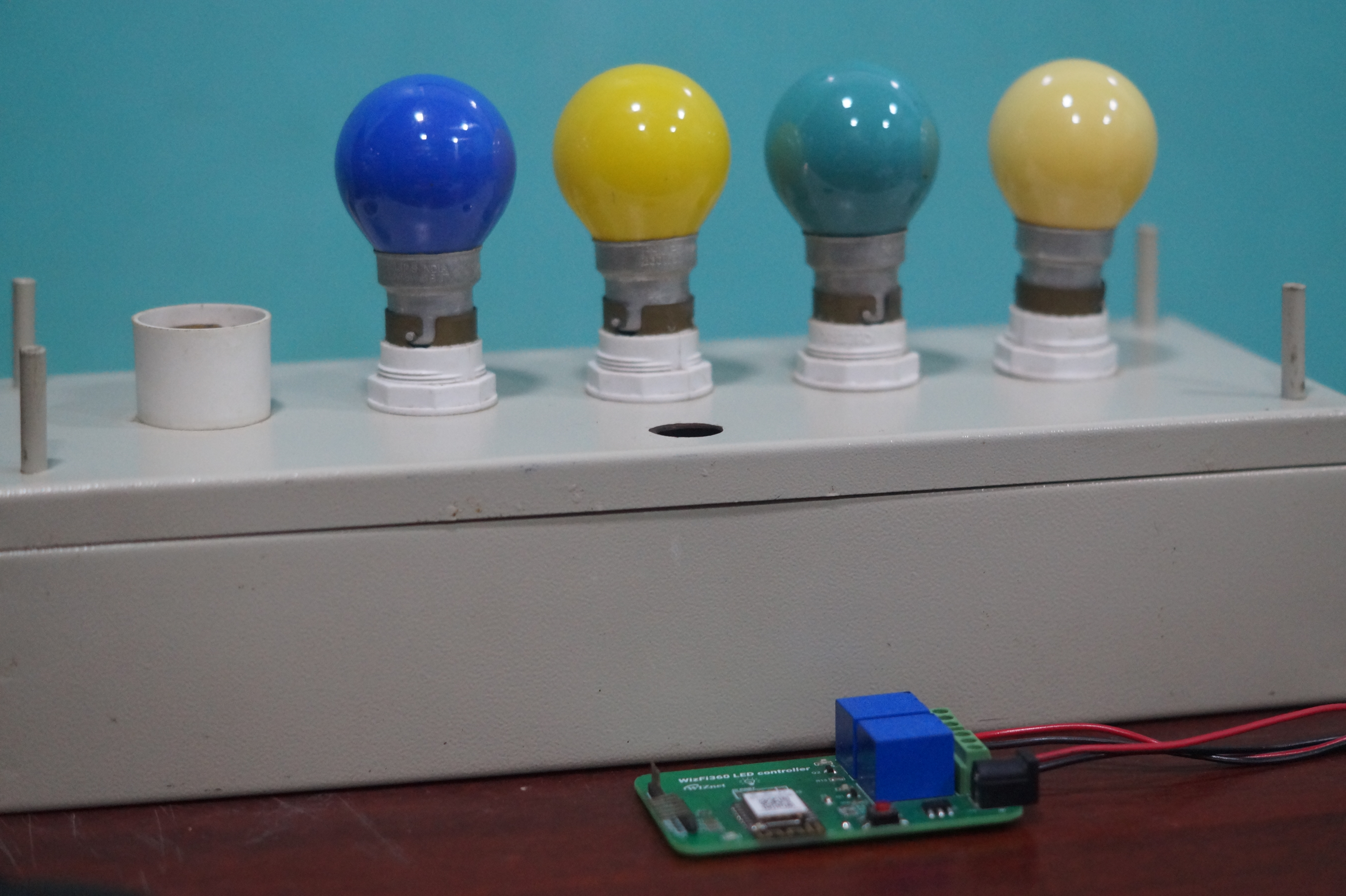 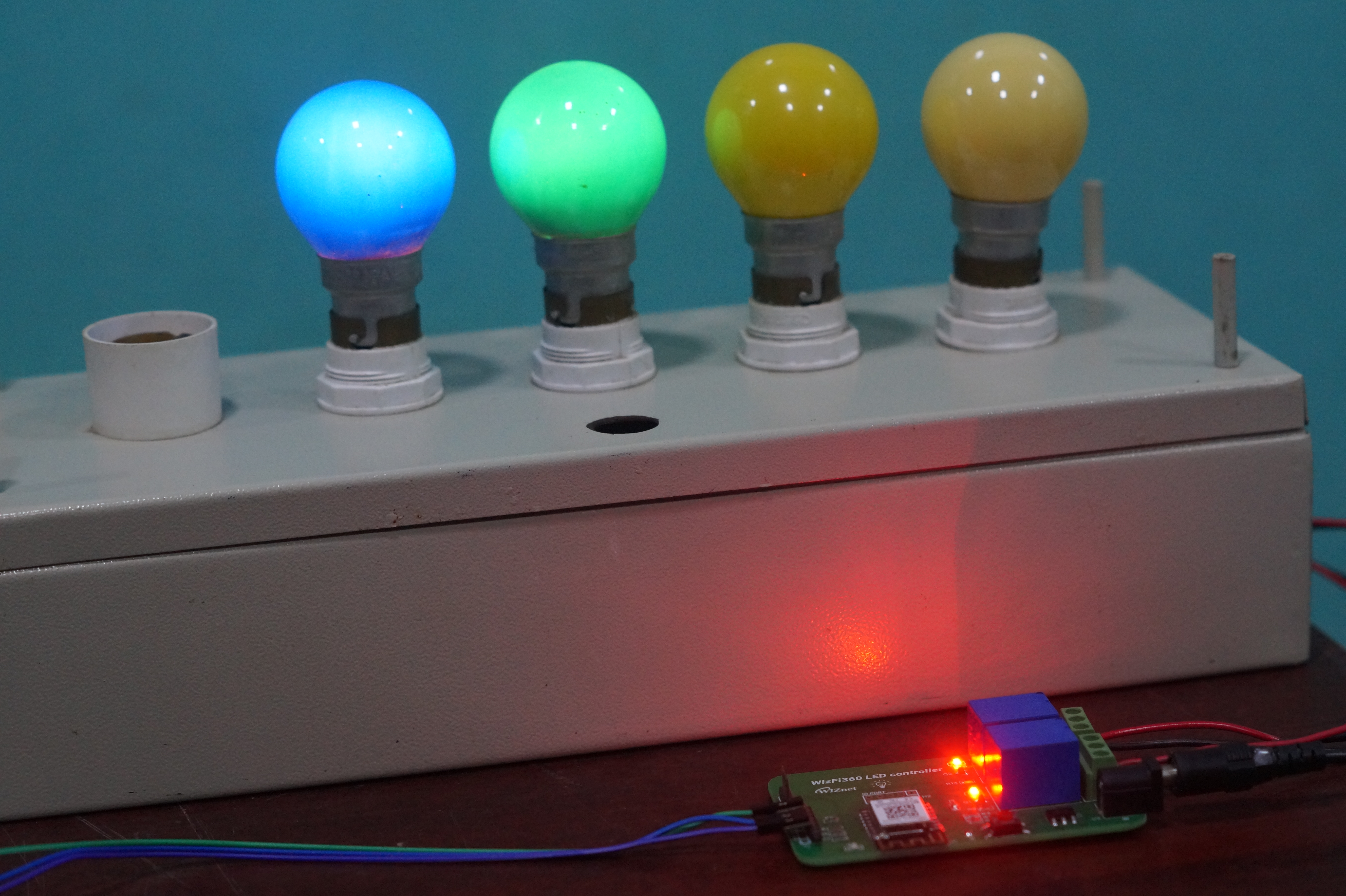 Thanks wiznet for the free hardware and all the best to all the participants.