Arduino Uno, Arduino Ethernet Shield W5100, RF modules(433Mhz), MQ-7(CO-sensor), MQ-6(LPG gas sensor), PIR motion, custom built digital pressure sensor (basically a button switch array), 4 loads. The role to take all the sensor readings. The commands from the Cayenne dashboard is received by the Master and send to the slave Arduino using RF modules which are used to drive all loads and security systems. The slave Arduino is also connected with a 4×4 keypad which is used to enter the password of the owner, it can also be used to control the loads using the hand if something goes wrong with the internet connection at home.

Whenever there is a leakage of LPG there is a messaging alert and an exhaust fan turn on trigger. When there is smoke level high the exhaust fan turns on and if its too high meaning fire causes the indoor sprinkler to turn ON. Temperature sensor does the same. Whenever someone steps on the pressure sensor it alerts the user with a text message and triggers the alarm which can only be turned off with a password.

I used the scheduling feature to turn ON the hall light bulb to turn ON everyday @ 6 pm. 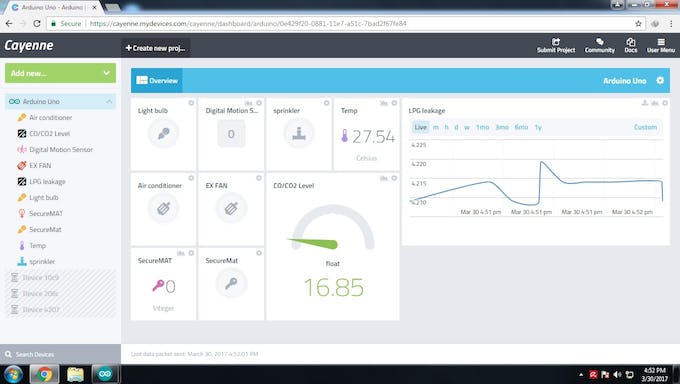 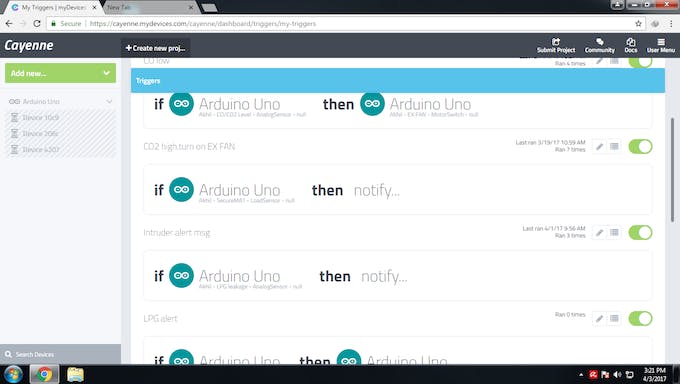